When it comes to buying fragrance for a man – whether that be for your partner, your parent or even a friend, it’s not always easy to get things right. Everyone has such a unique sense of scent preference and there’s a reason why often gifted fragrance can often go unopened for months. I think when you’re younger you don’t mind so much if something isn’t the ‘right’ scent for you – because you basically just want to smell good. So a nice new bottle of something at Christmas – whether it’s your normal ‘thing’ or not, would have previously been opened and enjoyed. As you get older and you develop a more distinguished scent palette, you come to learn what you like and what you don’t. Refining that palette is why it’s so important that if you’re giving the gift of fragrance to someone, that you remember a few key points.

These key points are even more important to remember when buying for men – who tend to be creatures of habit when it comes to their fragrances. Or at least, the ones in my life have been! My Dad is a nightmare – he’s worn the same aftershave for over a decade. He actively tells us to only get him that bottle at Christmas to help him stock up for the year. And he rarely ever tries anything else. My partner on the other hand has a specific taste. And although he has his statement and signature scent – he does use others too. Most recently the Colonia Sandalo by Acqua Di Parma. So here’s four things to remember when picking fragrance for a man: Don’t go off the bat. As much as you want to tick off the gift list and grab the nearest scent – don’t. To give a fragrance gift that’s truly worth having, you’ll need to put the effort in. A well chosen fragrance gift is one of the best you can give – so make sure your choice is based on the recipients preferences and not your own. Just because you like it, doesn’t mean they will. Get acquainted with their current scents and find out what sort of similarities you can find within them. Strength, musk level etc. I knew my partner would love the Colonia Sandalo by Acqua Di Parma because it’s musky and lingers in the air as well as around the body. Which is what he likes. It’s deep and sensual too with a heavy woody element and a contrasting top note of citrus – which means it’s perfect for him.

There’s multiple types of fragrance – eau de toilette, eau de parfum etc. It’s hard to know the difference. Basically the more concentrated a scent is, the more it will cost as you’re paying for the richness. For example eau de parfum is approximately 15-20% fragrance whereas parfum is 20-30% fragrance. Eau de toilette on the other hand is 5-15%. If your man likes strong scents that last hours then go for the stronger variations. Our Colonia Sandalo is actually Cologne Concentree – which is Acqua Di Parma’s strongest fragrance available. But it’s worth every penny because it outlasts every single other fragrance in my partner’s collection – without exception. 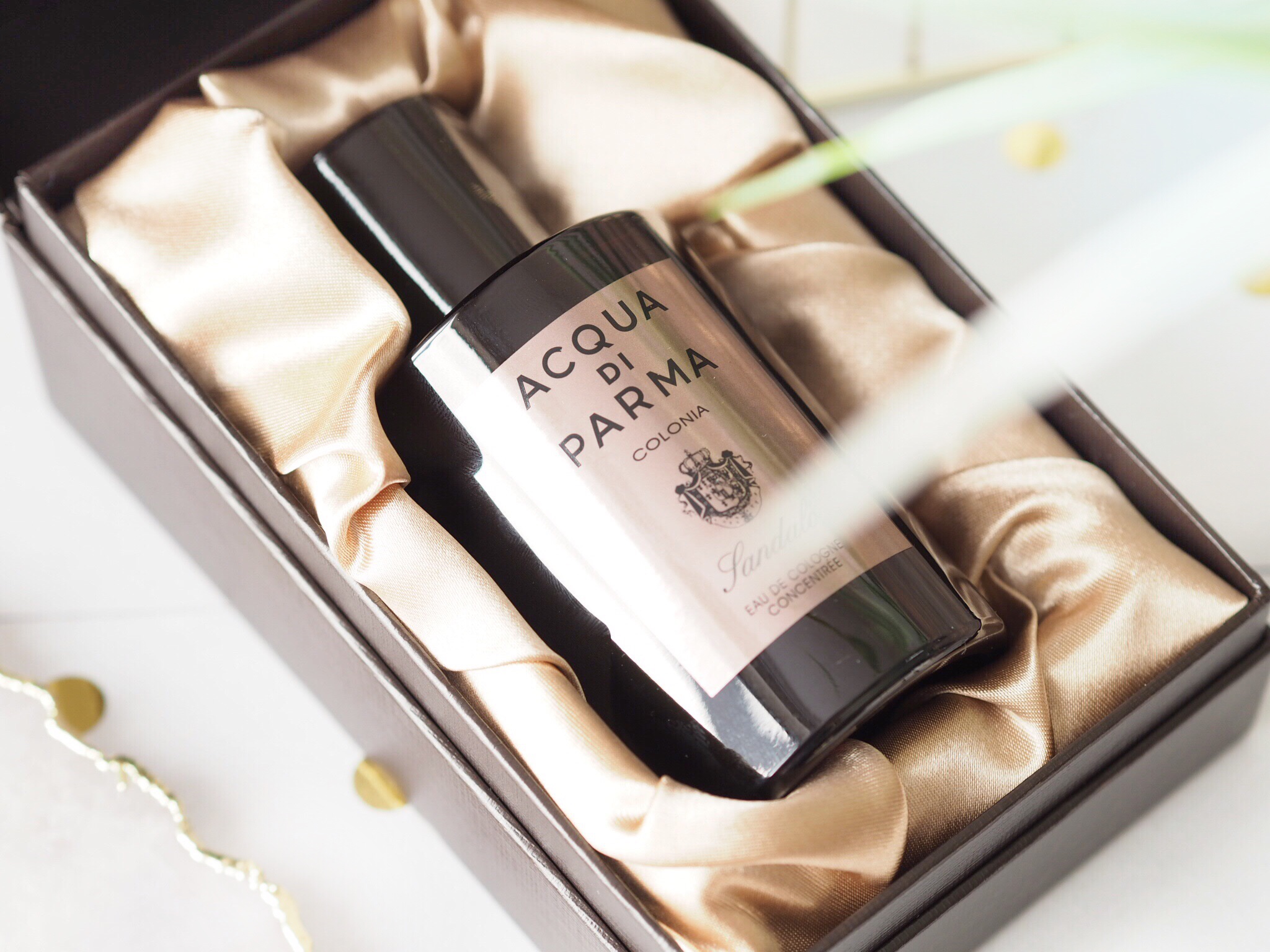 When physically trying any scent there are some simple tips to remember. For mens aftershave and fragrance you’ll want to apply to the wrist and inner elbow as your points of reference. Avoid using those cards in department stores – skin evolves a perfume differently, and you want to walk around for a while and keep checking these areas with your nose. This will give you an indication of how your chosen scent evolves – and whether you truly like it or not. When I first tried Colonia Sandalo I then went for coffee in between (coffee is recommended to be smelt in between perfume smells to break down the confusion and clear the nose) and then re-tried. I loved how it settled just as much as how it applied. So I knew I was on to a winner.

Get the right size

Fortunately fragrances come in multiple sizes, which means there’s loads of choice about which ones you can get. If you know the recipient well (a partner for example) then there’s nothing stopping you going for the larger bottle. If you know them less well and have a little less certainty then go for the smaller size just in case. I was pretty certain my partner would like Colonia Sandalo and got the 100ml, but it’s also available in the 180ml too.

My partner loves Colonia Sandalo by Acqua Di Parma – and it’s got very similar qualities to his preferences – the woody notes making it musky and very masculine meant I knew I had a firm chance of him liking it. And the top notes of citrus also added to this because he likes fragrances to be freshening on him. While it was strong and powerful, it wasn’t overwhelming so it wouldn’t put others off – but rather intrigue them. And he’s had several questions over it since he begun to wear it. Having got used to his scent tastes meant I got a great addition for his fragrance collection so we were both happy. Keep these tips in mind next time you’re fragrance shopping for the men in your life and you’re sure to be on to a winner too.

And if you want to check out our new favourite, you can find the gorgeous Colonia Sandalo by Acqua Di Parma over on their website.

**This post contains gifted items but as ever all opinions are entirely my own. Please refer to my Disclaimer page for more details.